The Whalers graveyard of Smeerenburg 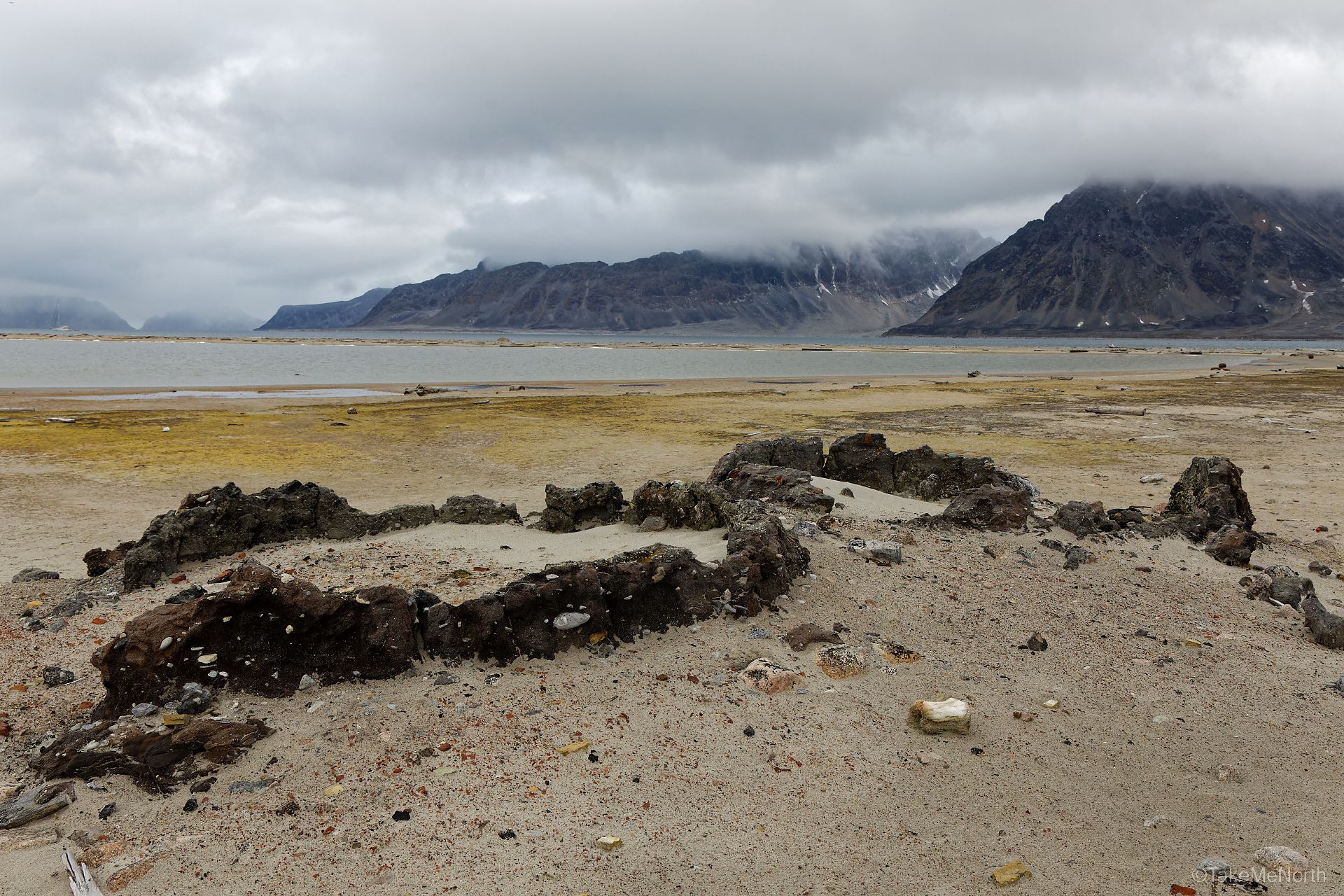 The Discovery of Spitsbergen in 1596 by Willem Barentsz sparked stories all over Europe, speaking of rich whaling grounds of the arctic seas. Tales spoke about an abundance of Greenland Right whales, so many that “you could cross the sea jumping from one whale to the other”.

The first Dutch whaling expedition departed for coast of Spitsbergen in 1611. The Dutch had no experience hunting whales, which resulted in low results. The following year they hired some experienced Basque whale hunters from Spain, but unfortunately, a clash with the English Muscovy Company caused another disappointing profit. It was clear that things needed some organization.

In 1614, the Noordsche Compagnie was established. The merchants formed a united front against the Muscovy Company and gained support of Dutch Provinces and their warships. In the first years, they sailed on the arctic island Jan-Mayen. In 1618, they moved their operations to Amsterdam Island (Amsterdamøya) on the northwest coast of Spitsbergen. The site was called Smeerenburg (usually translated to blubber town).

The Greenland Right whale, which we now know as the Bowhead whale, was called ‘Right whale’ because it was the right whale to kill. They moved slowly so they could be approached in a rowing boat. Once they were killed, they floated to the surface. They literally went ‘belly-up’, in contrast to some other whale species, which would disappear into the depths. Their fat, or blubber, was boiled into oil. The resulting oil could be used as lamp fuel or as an ingredient for soap and paint. It was sold for good money in Europe. Additionally, the baleens of the bowhead whale were used in upper-class clothing, like dresses, corsets, and umbrellas.

Smeerenburg gradually grew into a small settlement. It had primitive living quarters supporting a couple of hundred men. 16-18 wooden buildings are documented, including a small fortification. Each Dutch city that participated in the Noordsche Compagnie had its own quarters.

Amsterdam Island has a mountain that is perfectly suitable as a lookout for whales. Edible scurvygrass grows on the hill, so the whalers named it Salaetbergh (salad mountain). The Spotters at Salaetbergh guided the 6-men rowing crews to the whales. When the boats got close enough, a harpooner pushed his harpoon into the whale. The dangerous fight to the death between the boat crew and the whale commenced. A whip of the tale could easily result in death. Once the whale was killed, the land crew towed it onto the beach. The whale was cut into bible-sized patches, called books or bible leaves. These patches were thrown into 3-meter copper kettles and boiled into oil.

Throughout the years, these kettles were improved. Eventually, these kettles transformed into ovens with brick foundations and chimneys. Smeerenburg had 15 of these ovens in its heydays (7 double and one single).

The foundation of many of the furnaces is still visible at Amsterdamøya. Some foundations have been lost in the sea because of changes in the shoreline. A double oven at the beach has recently been claimed by a group of sun-bathing walruses.

Whaling on Spitsbergen was a seasonal activity. The ships left the Dutch republic in spring with whalers and building materials like timber for a three-week voyage. They usually left the site in September when whaling became too dangerous because of the drift ice, leaving the outpost unguarded. After an outpost at Jan Mayen was found looted in spring, they decided that volunteers should remain at Smeerenburg, guarding the assets throughout the darkness of the arctic winter.

The first Smeerenburg wintering of 1633-1634 was successful. The crew had stocks like dried beef, beer, wine, and gunpowder. Before winter fell, they harvested scurvygrass from Salaetberg. Everyone lived together in one house with a small stove. Nevertheless, winter was brutal, and they had to improvise to make it through; when bullets ran out, they melted tin drinking cups to make new ones. These allowed them to keep hunting for fresh meat, like walrus.

The following winter, all seven winter crew members died of scurvy. In spring 1635, the summer crew found their bodies in a scurvy-cramped position. They buried the unfortunate winterers in coffins in the frozen ground of Smeerenburg. Dutch archeologists found the seven graves in 1980.

Permafrost is ground that continually remains frozen. The permafrost layer at Spitsbergen used to be near the surface. Since the 1970s the average temperature at Spitsbergen has risen by 4°C, which causes the upper layers of permafrost to melt. Graves that were once in the ice and have been preserved for nearly 400 years, will slowly start to decay. This raises an ethical dilemma: protect the archeological history, or let the sailors have their peace? And what is ‘peace’, if the permafrost slowly exposes their remains?

The decline of Smeerenburg started in the 1640s. The Noordsche Company ceased to exist in 1643 and as a result the catching quota were also abandoned. In the following years, the number of killed whales quickly spiraled out of control to unsustainable levels. Whales became scarce in the bays and sounds around Amsterdam Island. At the same time, beach-based processing of whales was also slowly replaced by processing at sea. The last documented use of Smeerenburg was in 1657. The ruins of Smeerenburg are part of the North-West Spitsbergen National Park since 1973.

Smeerenburg was the busiest arctic site for rendering oil from whale blubber in the 17th century. Dutch archeologists estimated that at its heydays, a couple of hundred workers were present at the Smeerenburg outpost. Its myth slowly grew after the site became obsolete in the 1650s. Several 20th century publications spoke of a city with 12.000 to 18.000 workers, brothels, dance halls and shopping streets. Read more about the myth? There’s an excellent post on Public Domain Review: (The Myth of blubber town, an arctic metropolis)